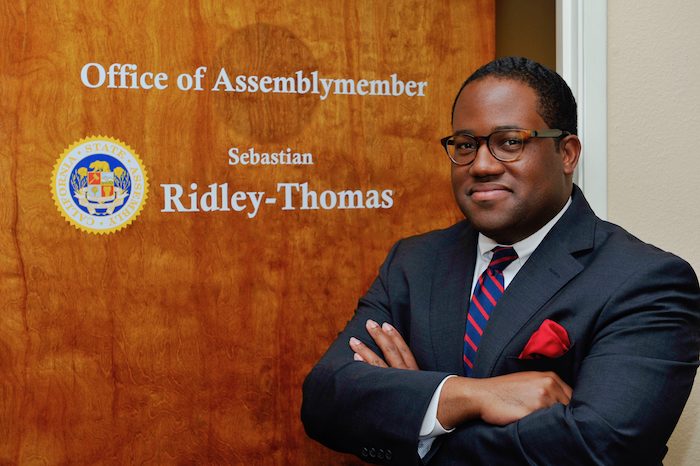 “Think of your assembly as the California version of Congress,” said California Assemblymember Sebastian Ridley-Thomas, who visited the Sentinel recently to talk about his role in the state’s economic development, healthcare, his job description and the legacy he hopes to leave.

“If you’re more oriented to the private sector, we’re the board of directors for the 176 billion dollar corporation known as the state of California. We make decisions at the policy level to guide where money, where administration and where resources go to impact the lives of Californians in healthcare, welfare, transportation, management of natural resources including parks, mineral resources, the ocean, trees, water, etc., as well as public safety with our state prison system and any number of economic activities that help make the state golden.”

Ridley-Thomas began his work in the State Assembly in 2013 at age 26. Before that, he had been the public policy director for then State Senator Curren Price, advising him on undertakings like workforce development, transportation and housing. Ridley- Thomas, the son of L.A. County Supervisor Mark Ridley-Thomas, was reelected to the Assembly in 2014.

Currently, the Assemblymember serves on four Assembly Standing Committees. He is chair of the Revenue & Taxation Committee and a member of the Health, Banking and Finance, and Local Government committees. He previously served on the Appropriations, Elections, Public Safety, Labor, Rules, and Water committees. In public advocacy, the young Ridley-Thomas said he is focused on creating a more just and fair society, championing inclusiveness in a variety of realms: increasing access to high-quality public education; millennial empowerment; protection of seniors; creating equal access to health resources; supporting and promoting the inclusion of minority businesses in private and public sector contracting and procurement; and eliminating homelessness in this legislative session. 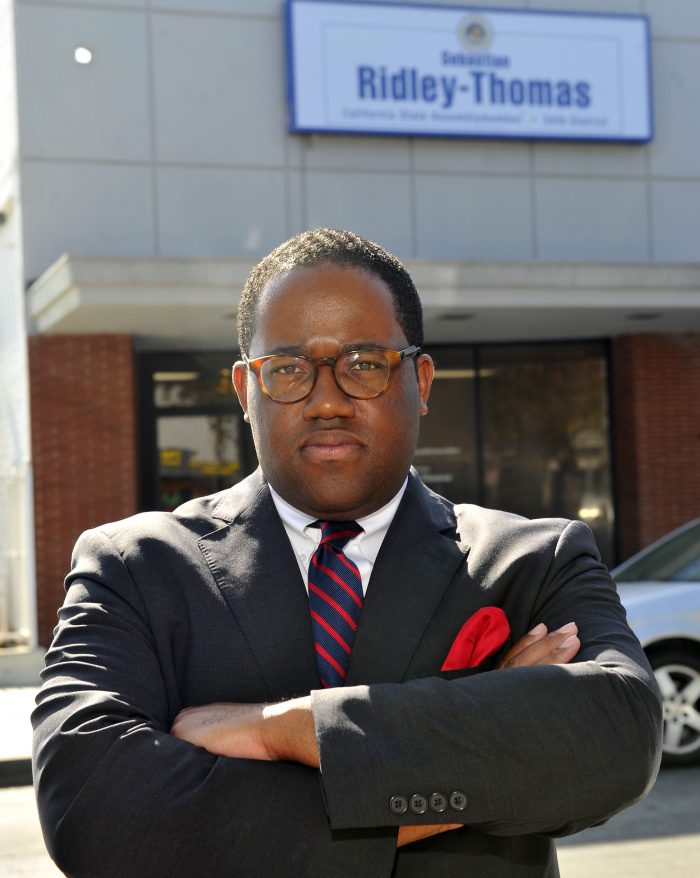 “I came as child of South Los Angeles in the Crenshaw District to consciousness as one who believed in positive economic growth,” Ridley Thomas explained to the Sentinel.

Seeing these issues as an adolescent led him to focus on improving economic opportunities for the underserved as a way to continue the Civil Rights Movement for his generation.

“If the movement is to continue, it has to be through making sure the people can earn a decent wage, to start and maintain a business and that we can have black dollars work for us in our community for the better.”

Ridley-Thomas said undertakings like the developing transit system in L.A. County for instance will be instrumental in accomplishing that by creating jobs and a variety of other opportunities. But there are also matters like the immigration/ sanctuary city issue and healthcare that can affect the economy here. These are the things that he and the other assemblymembers are keeping close watch over and communication with the Federal Government for.

Washington’s recent, albeit failed efforts to repeal and replace the Obama administration’s Affordable Care Act, is not something California takes lightly, he said. 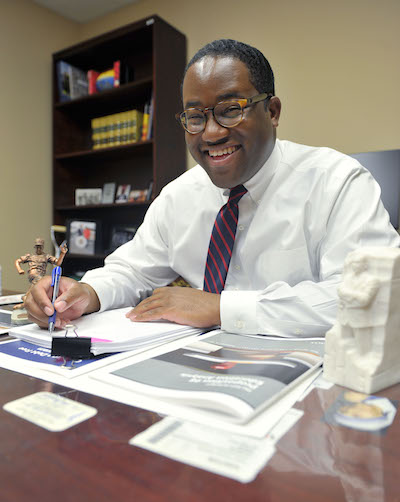 “Here’s the whole point about healthcare that often gets lost,” Ridley Thomas explained.

“If people don’t have insurance, they go to the emergency room to receive care or they die early. That means two things: One, if you die early that’s lost economic productivity and unnecessary distress to your family. Second of all, if you go to the emergency room, that’s the most expensive care. When California was living the pre-Affordable Care Act life, we had double digit uninsured, somewhere in the range of 20 percent. Right now, we’re at 7 percent uninsured. That means we save a lot of money on hospital visits, we save a lot of money on the management of chronic conditions which means if you look like you’re prediabetic or look like you got heart problems or look like you got high blood pressure, you can start treating it early in your thirties rather than your sixties when you’re near end stage renal failure and you’re not in the best of health.

“If everybody is in the healthcare system, the risk and the cost is spread as opposed to the sick and the low income not being in the system and then everybody pays more through higher premiums because they can’t afford the ER costs. The ER is so expensive that a moderately wealthy person could not afford the actual cost of care.

“Not being able to accomplish [repeal and replace] has forced [the Trump Administration’s] hand.  So, what we anticipate they’re going to try to do, the president and those who do not care about healthcare in the Republican party, are going to try to cut it through subterfuge and sabotage.”

“We will not let that happen in California.”

The Assemblymember also talked about the importance of California maintaining its sanctuary cities.

“The reason why [immigration] is so important to appreciate in California is because undocumented immigrants contribute billions of dollars to the economy,” he explained. “They are part of families with mixed documented status. Many of them are working. Many of them put more in than they receive.”

“Immigrants are business owners, they are in the healthcare sector, they work in all facets of life in California. They pay into Social Security and are unable to receive it.”

During his career, Ridley-Thomas has focused on delivering results for the communities he serves through issues such as infrastructure improvements and public safety initiatives. He advanced public protection by extending the law to evict tenants who engage in gang activity and violent crimes with the use of firearms, and by fighting to make sure the state’s Department of Justice keeps guns from dangerous criminals, for instance.

He has promoted the modernization of the Los Angeles International Airport through sound finance options and inclusion of local/minority/veteran/women-owned businesses on LA Metro projects, he said.  Also, education and workforce development have prominent roles in the assemblymember’s agenda.

“My great-grandmother said one of her favorite songs said ‘if I could help somebody as I pass along, my living shall not be in vain,’” Ridley Thomas said.

“My help, I think would be in bringing state resources, money, policy changes, people and opportunities. It would be, being able to respond to the concerns of my constituents… jobs, quality economic opportunities and business opportunities, economic development, housing challenges, being relevant and engaged in the questions of today so that they can say, ‘here lies someone who helped somebody.’ That is the greatest value that I derive from public service. That is what it means to me.”